14 Famous Rooftops Around the World

Because we love rooftops more than anything on this actual planet, we’ve rounded up a load of world famous ones. Are they worthy of their acclaim? You decide.

What do you do when you’re walking around Singapore’s Marina Bay and you start to feel a bit warm and sweaty? Obviously you hot-foot it up 55-storeys to the longest elevated swimming pool in the whole actual world. If you’re scared of heights, this is not for you. But if you’re willing to get a bit of vertigo in exchange for 360-degrees of shit hot views and a paddle 191-metres above ground, you’re gonna have to drop it like it’s hot because only hotel guests are allowed up there and a basic suite starts at $2,079 a night. 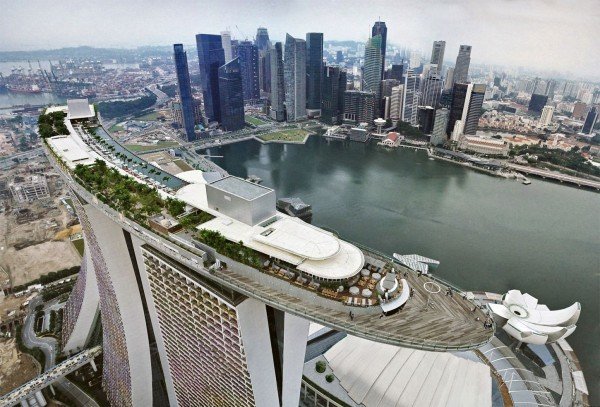 In the depths of the woodland park of the Bois de Boulogne, Frank Gehry appears to have gone all batshit with a load of glass. This controversial building – the construction of which was temporarily halted by suburban residents, Parisians and anyone with eyes – was funded by the richest man in France and looks like someone parked a massive checked ship, or dropped a giant glass chess board and couldn’t be arsed to clean it up. Regardless of exterior, it’s home to a series of roof terraces that’ll provide you with excellent views of the Eiffel Tower, Montmartre and the towers of La Defense. It’s also a wicked place for hide and seek, y’know, for kids… 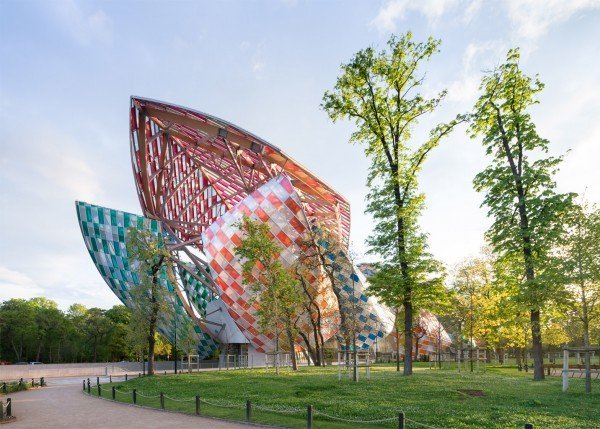 Housed 64-storeys up, this is the world’s highest open-air bar, sat on top of Singapore’s second highest building. Probably the most famous rooftop bar in the world, this bad boy was the setting for a boozy scene in The Hangover II and is now the proud mixer of the cocktail, Hangovertini (we’d have come up with a better name for that, just saying). Being 820-feet above ground, a few cocktails down and you might start feeling a little… staggery. Just hold hands with whoever’s closest to you in the lift on the way down. 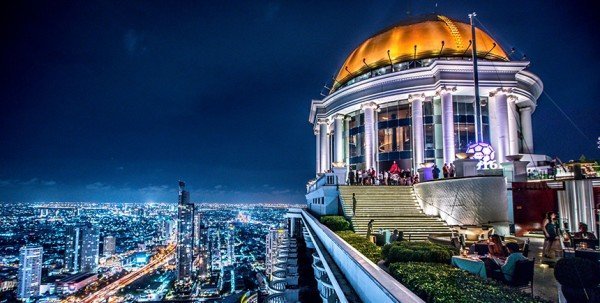 Big, built up cities are gagging for a bit of greenery so this lawn canopy perched above a glass pavilion restaurant is the best you’re gonna get for urban turf. It’s also some impressive space-saving exercise and a totally blag-worthy justification of opening another restaurant that’ll take up valuable public space. If you ask us, chucking some grass on top of a one-storey building is borderline genius. 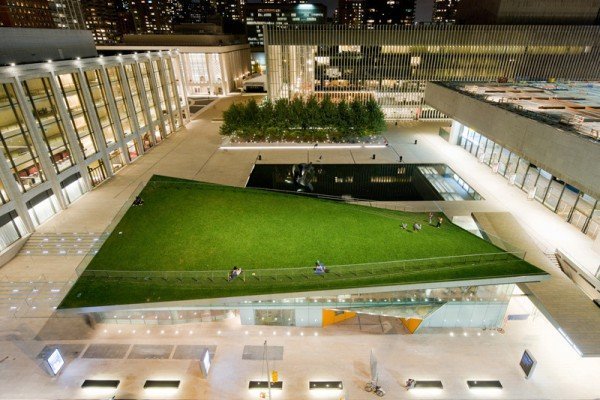 China is copying this Milan concept that features a load of plants climbing up two skyscraping towers all in the name of nature. Due for completion in 2018, this was first thought up as a way to absorb up to 25 tons of that nasty carbon monoxide that also looks really amazing if you like that kind of oblong forest thing. It should also create around 60kg of oxygen a day whilst chucking out smug eco-friendly vibes from everyone inside. Most importantly, one tower will have a rooftop pool and the other is getting a private rooftop club. 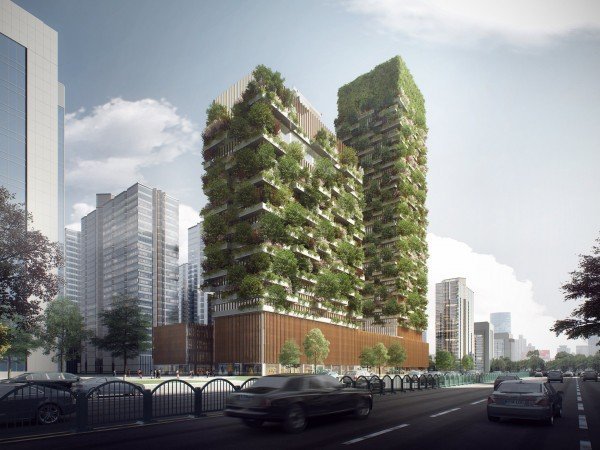 For some unexplained reason, this arty rooftop on the world famous MoMA is rocking a sort of neon, military camo look as if it’s trying to disguise itself whilst simultaneously screaming for attention like an awkward adolescent middle child. What is it trying to hide? Why is it dressed up like one of the All Saints? Why is it so smugly ironic? We don’t know. What we do know is that there’s no actual garden paraphernalia up there – y’know, like trees and grass – because everything is either plastic or plexiglass. Also no one’s allowed up there, so what the hell is the point of life? 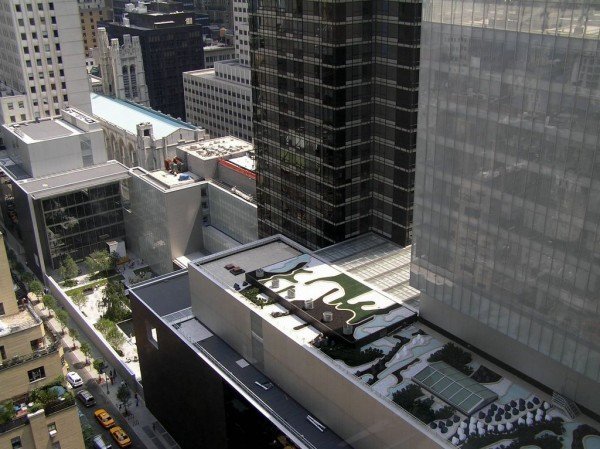 This nineteenth century gasholder has had a few new looks over the years. It’s been an air raid shelter, a homeless and refugee shelter, and now it’s luxury housing, obv *eye rolls*. The building is the only surviving gasometer of its type in Berlin and it’s home to 13 private gardens adjoining apartments. Sure beats my window box. 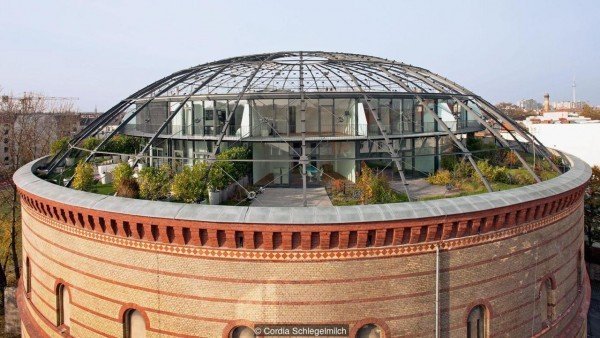 Not only is this 90-year-old rooftop one of the best because it’s where we set up all our LA screenings (brag), but it’s also the building-shaped dream of Ricardo Montalban to provide young people, particularly Hispanic, with a place to hone their skills ahead of performing arts careers. We screen our favourite films from this rooftop because the views across Hollywood, particularly at sunset, are basically the best.

Want to come up to our LA rooftop? Get tickets here.

Hiding above the hectic streets of west Midtown Manhattan, this bar, restaurant and terrace is the largest outdoor space of any New York hotel. Showing off a whopping 7,000 square feet of ground, this is the ultimate party spot in the sky, surrounded by buildings hiding in the clouds and views across the city. Most importantly, it’s where we set up for a summer of NY screenings. See what we did there?

Coming up to see us in New York? Get your hands on some tickets here. 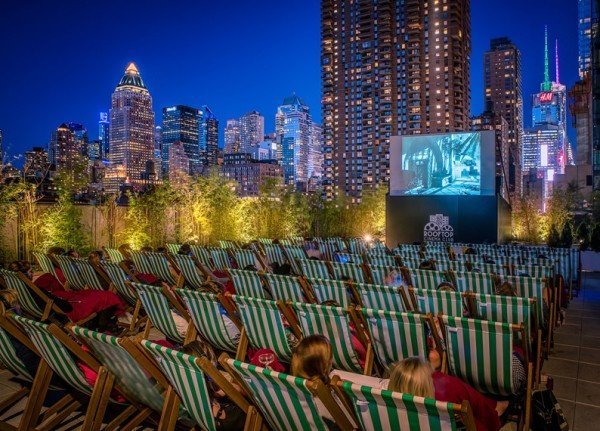 It might not be crazy high at just two-storeys up but the rooftop has insane, completely unobstructed views across the city so literally who cares? The arts and production office park is fully for rent and some serious shit has gone down on the roof in the shape of music videos, gigs, massive private parties and… you guessed it, our cinema screenings!

Get tickets to our Brooklyn screenings here and look out over the city with us. 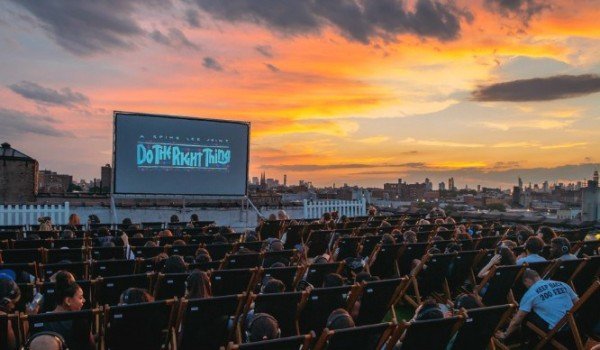 You’re gonna have to haul your backside up six flights of stairs for this one but it’s worth it for at least four reasons. 1. There’s a bar up there (important for booze-based climbing rewards), 2. The views of London’s protruding skyscrapers – we see you, Shard – are ridic, 3. You won’t have to work out for a week because you’ll have thighs of steel from the stairs, and 4. WE LIVE THERE! Plug much?

Get tickets to our Peckham summer film screenings here now! 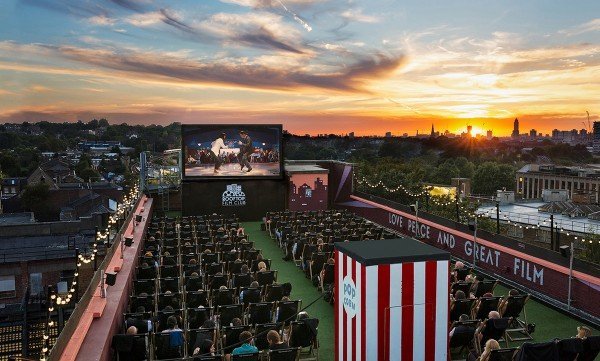 There are flamingos up here, alright. Actual gorgeous bastard flamingos. Not enough of a reason to visit? Alright. Sitting pretty 100-feet above the ground, this London rooftop is home to three gardens all spreading themselves across a whopping 1.5 acres. They’ve got everything going on up there with a bar, restaurant, nightclub, private members club and a rooftop film club… ahem. Also, flamingos.

Come and meet the flamingos before checking out a film! Get your tickets here. 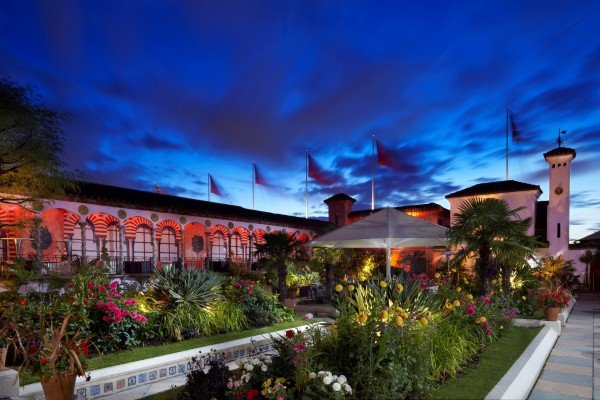 If you don’t think you want to hang out on the top floor of an East London car park then you could not be more wrong because this multi-storey is all kinds of shit hot. Not only have they got London’s first urban farm chilling in a shipping container up there, they’ve also got murals by local artist, Louis Masai. Not enough? Alright. They do rooftop yoga up there for when you want to align your chakra at altitude, there’s a bar, street food, a brand new club with crazy golf, roller disco, batting cages and an actual hip-hop-themed bowls experience. What’s that? Why don’t we screen films up there…? What a GREAT idea…

Get tickets to our Roof East screenings right here! 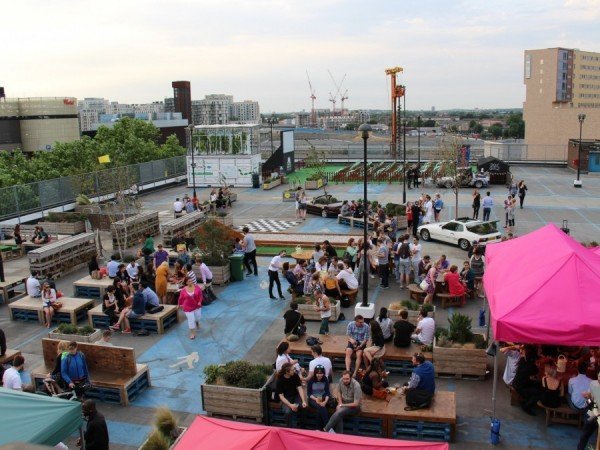 This Shoreditch rooftop bar terrace goes through bi-annual transformations that change with the seasons. We’re talking Nordic Viking hangouts for winter and Lost Boys-style Neverland ‘hoods in the summer. Whatever makeover it’s getting, booze is readily available for those who like their views with a side of vodka and we heard on the grapevine that someone hosts a pretty wicked cinema up there too… *wink*

Join us at the Queen for a summer of screenings in Neverland. Tickets can be bought here. 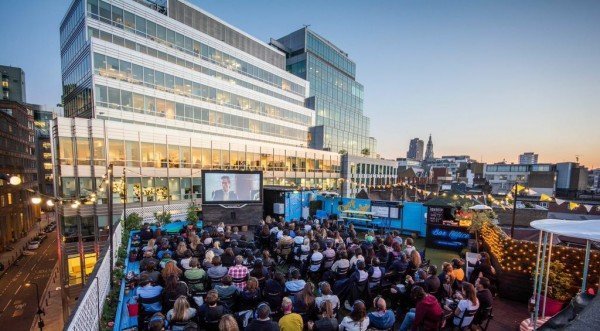