Guilty Pleasure Movies That Are Actually Worth Watching

We’ve all got ‘em; films that are so bad they’re good. From cheesy rom coms to cringeworthy thrillers, everyone loves a movie that they’d never admit to having watched. Go ahead, we don’t judge…

Mike, aka Channing sexy Tatum, is desperate for money. By day, he does anything he can to get his hands on some dollar but by night, cash-waving ladies do anything they can to get their hands on some pecs. Seeing the potential in a fellow stripper, Kid, Mike takes him under his baby-oiled wing and shows him the tricks of the trade.

There’s not a single stunt double in the film. Yep, that arse is 100% McConaughey.

“Fact is, the law says you cannot touch! But I think I see a lotta lawbreakers up in this house tonight.” 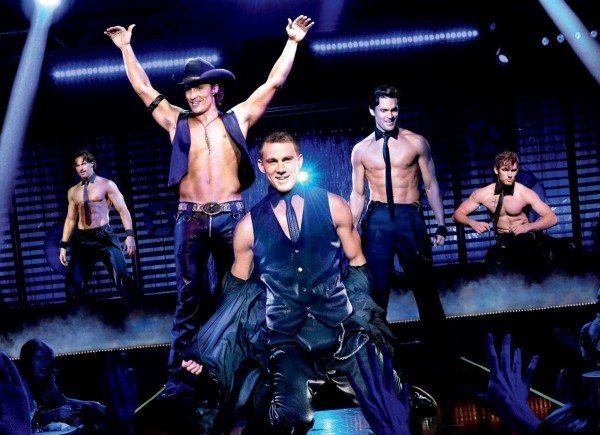 It’s two years after the original Grease (which very narrowly missed a spot on this list, by the way) and the T-Birds and Pink Ladies are singing their way back into Rydell. Rizzo, Kenickie et al are long gone and Stephanie Zinone (Michelle Pfeiffer) and Johnny Nogerelli (Adrian Zmed) are leading the two gangs – we use the word ‘gangs’ incredibly loosely here; these are the wettest gangs of all time. Anyway, a lot of shit goes on between Stephanie and Johnny because she fancies some other guy and he doesn’t like it, blah blah blah. Eventually, Stephanie ends up with her guy and all the couples pair off and sing another bloody shit song.

Tom Cruise auditioned for the role of Johnny. (Nothing interesting happened around – or even in – this film. Doesn’t stop it being super watchable.)

“The Pink Ladies pledge to act cool, to look cool and to be cool, til death do us part. Think Pink!” 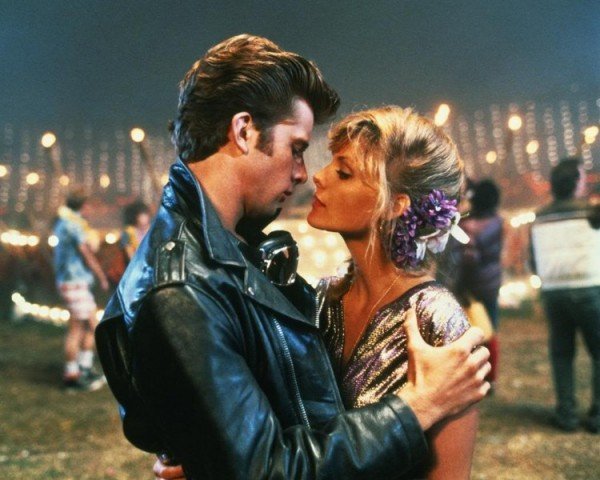 So Jonathan (Andrew McCarthy) is presumably actually insane, they just never go into it until the film ends. This guy falls in love with a department store mannequin, played by Kim Cattrall. He names her and she comes to life. The store’s manager plays a bad guy even though he’s actually trying to stop this terrifying nonsense where this dude is in love with an actual mannequin. SMH.

The director came up with the idea for the film after walking past a department store window and seeing a mannequin move. Except obviously it didn’t move and this dude has gotta be on something.

“At least she’ll never tell you that your hips are too fat.” 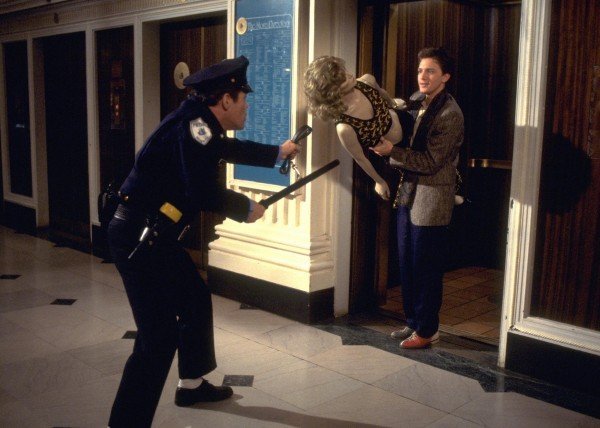 Bruce Willis is an astronaut or something. An asteroid threatens to destroy the earth. A plan fails. Bruce Willis dies. Aerosmith.

Director Michael Bay says this is the worst film he’s ever made. So….

“Hey guys, remember, we’re heroes now. So that incident with me and the gun on the asteroid, let’s keep that under wraps, all right!” 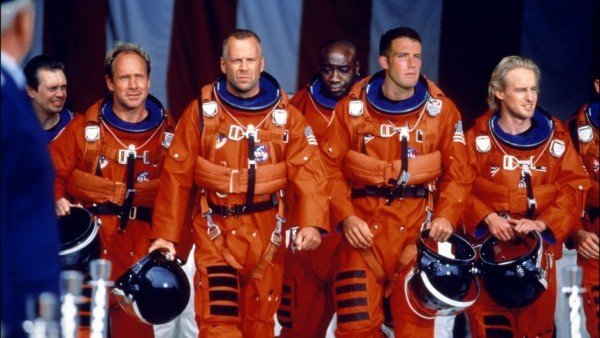 Jenna Rink is, like, totally over being 13. One day she wishes so hard that she was ‘thirty, flirty and thriving’ that she wakes up 17 years older with a naked man in her flat. Her best friend/colleague/secret bitch trying to take her down doesn’t seem to find it weird that her previously normal mate has regressed to talking like some pre-pubescent schoolgirl whose crush has just accidentally grazed her boob. Jenna tracks down Matt, her old best friend who helps her with something at work and they fall in love, because rom-com rules. Literally nobody questions her weird personality change and at no point does she seem that bothered that she’s lost almost two decades of her life.

When Jenna speaks to Matt before he gets married, the book Time’s Arrow is behind him. The book is about a man who experiences life in reverse. MIND BLOWN, BITCHES.

“I’ll have a Pina Colada. Not virgin. Wanna see my ID? Totally have it.” 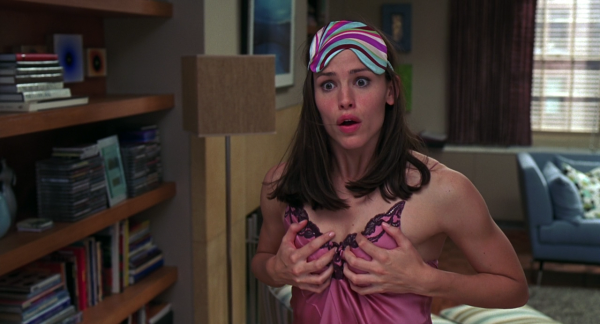 Spoiled heiress, Joanna (Goldie Hawn), falls off the side of her massive yacht and forgets who she is. Local carpenter, Dean (Kurt Russell), who met Joanna when he was fitting a closet on her boat, decides to pretend she’s his wife so she can look after his awful children and clean their disgusting house. Quite a lot of effort to go to just to avoid washing up, mate.

Real life couple, Goldie and Kurt’s own young children were on set with them throughout filming. Their youngest kid, Wyatt, took his first steps on the set.

“Well, I’m glad y0u’ve finally come to your senses. I was prepared to sue you. I don’t know who I am, but I’m sure I have a lawyer.” 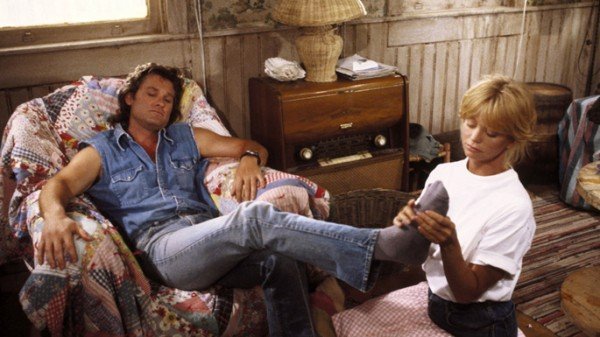 It’s the Fourth of July and McClane, who after three previous Die Hard outings remains questionably alive, has come to save the day when a US infrastructure is under attack which puts the safety of the whole country at stake. His now teenage daughter also gets herself kidnapped which is nothing short of totally inconvenient. Also, there are too many hints at another sequel in this film.

This is the first Die Hard film where nobody talks about Christmas. 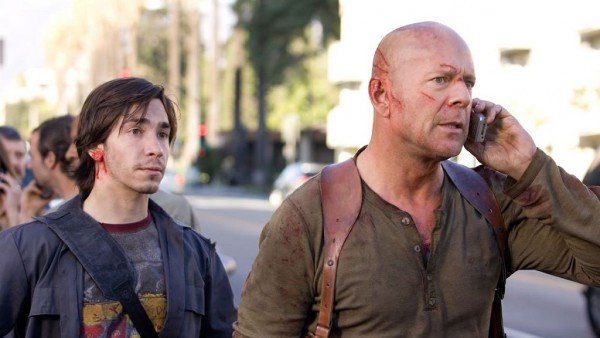 Andie Anderson (who came up with that name?) and Benjamin Barry (that one too, actually) meet in a bar without realising that both are on some sort of quest; he wants to make her fall in love with him for a bet, she wants to get him hooked and then put off for an article, both conveniently within the same 10 day time slot. Ten days isn’t that long, guys. She meets his parents, his friends, buys a dog and goes to a very formal work event with him and it’s all meant to be totally normal.

“Listen, if you’re gonna name my… my member, alright, you gotta name it something hyper-masculine, okay? Something like Spike, or Butch, or Krull, the Warrior King.” 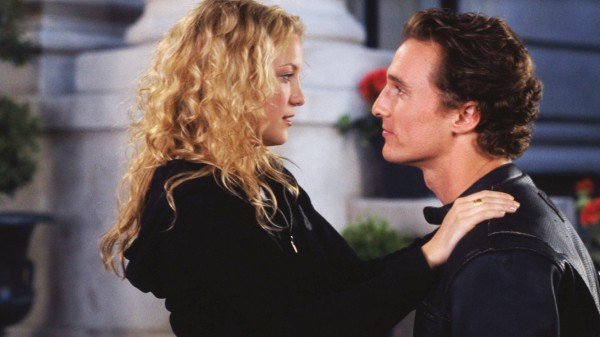 Misfit girl, Bella (Kristen Stewart) meets emo kid, Edward (Robert Pattinson) who turns out to be a vampire. Because Edward doesn’t want her blood – what kind of vampire even is he? – he and Bella fall in love, obvs.

R-Patz didn’t speak to anyone for a couple of weeks before filming began so he could get a feel for how isolated Edward is. Alright, method.

“Could you act human? Okay, I have neighbours.”

Richard and Larry have uncovered a fraud. That’s some stressful shit so their boss, Bernie, invites them to stay at his beach house for the weekend. Turns out Bernie was the one behind the fraud and plots to kill the duo, however, Bernie gets killed accidentally instead. Ain’t that always the way. Richard and Larry decide not to let a little thing like the death of their host ruin their holiday and instead drag his corpse around town to sightsee which is what we’d all do, don’t lie.

Two real life guys copied this film when they found their friend dead and decided to take him on a night out instead of calling the police. Of course, they charged all drinks to their mate.

“What kind of a host invites you to his house for the weekend and dies on you?” 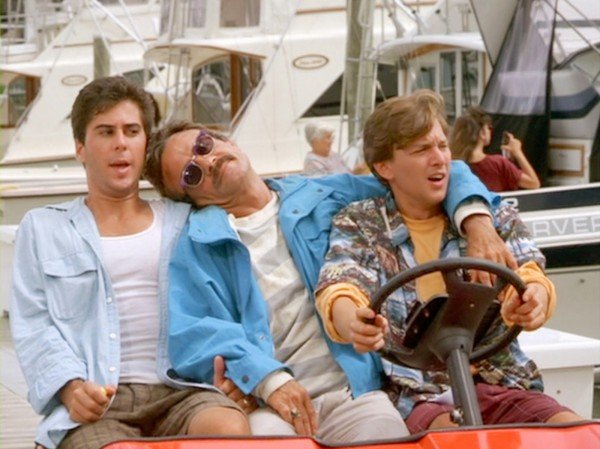 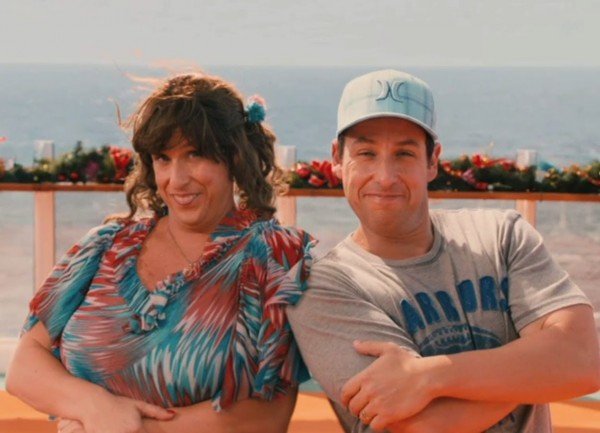